Posted on 4 April 2014 by terrasantalibera 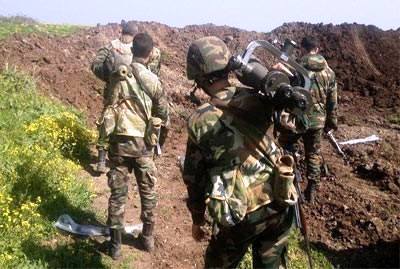 Army units continued their operations in al-Qalamoun area in Damascus Countryside, eliminating terrorist Abdullah Ghazal who was the leader of a terrorist group in the farms near the town of al-Sarkha southwest of Yabroud.

A terrorist hideout was destroyed in al-Batra’a area east of al-Rhaiba, resulting in the killing and injuring of many terrorists.

Army units destroyed terrorist hideouts in the mountains east of al-Zabadani, eliminating many terrorists including Abdelhadi al-Maghrebi and injuring more than 10 others, while another unit eliminated most members of a terrorist group along with their leader Osama al-Natour east of Jobar area.

In Douma area, an army unit destroyed a terrorist gathering in Aliya farms, leaving many terrorists dead including Omar Hammoud and Bilal Abdelhaq, while a series of operations were carried out in the towns of Deir al-Asafir and Ein Tarma and east of al-Mleiha in the eastern Ghouta, resulting in the death of 40 terrorists, the injuring of others, and destroying their weapons and ammo.

A military source said that an army unit targeted terrorists’ gatherings near al-Masri roundabout and the area surrounding Jordan street, killing and injuring scores of them.

Army discovers a factory for manufacturing IEDs in Homs

A unit of the armed forces on Tuesday discovered a factory for manufacturing explosives in al-Hosen village in Homs countryside.

A military source told SANA that the factory includes a huge numbers of IEDs prepared to be detonated, a big amounts of various kinds of explosives and equipment for manufacturing explosives.

Another army unit inflicted heavy losses upon terrorists during targeting their gatherings in the villages of al-Ghassebiyeh and al-Dar al-Kabira in the central province.

22 terrorists were killed and ten others were wounded as an army unit targeted their gathering in Daret Ezza area in the countryside of Aleppo, according to a military source.

The source told SANA that all of the killed and injured terrorists were non-Syrian.

An army unit foiled an infiltration attempt towards Barrakat al-Arman area in Aleppo, killing many terrorists and injuring others.

A car bomb went off while an armed terrorist group was preparing it in Tsil town in Daraa countryside and killed several terrorists, a source in Daraa province told SANA.

The source added terrorist Mohannad Mahmoud Dib al-Masri was identified among the terrorists.

The army also destroyed 2 cars equipped with heavy machineguns and 4 cars with all terrorists inside them.

The source added that another army unit targeted terrorists’ gatherings in al-Ghafer village in al-Rouj plain in Idleb countryside, killed and injured a number of terrorists and destroyed 4 heavy machineguns for them.

A car was detonated in Taftanaz town in Idleb countryside while terrorists affiliated to the so-called “Lewa al-Haq” were trapping it, killing a number of terrorists, among them terrorist Yousef Diyab, and injuring others.

The explosion also caused a big material damage to the place.

Army units destroyed a number of terrorists’ cars, killing all terrorists inside in Maaret Kafrin and Taftanaz towns.

A military source told SANA that a unit of the armed forces targeted terrorists’ gatherings in al-Kouz and al-Naser mountains, Nabaa al-Mur roundabout and al-Furunlq roundabout in the northern countryside of Lattakia, killed a number of terrorists and injured others.

The army also destroyed the terrorists’ weapons and tools including a car equipped with heavy machinegun.

A military source told SANA that an army unit killed and injured all members of an armed terrorist group tried to attack a military checkpoint in al-Dawayeh al-Saghira town in Quneitra countryside.

Meanwhile, other army units destroyed terrorists’ gatherings in the areas surrounding al-Hejjeh and al-Dawayeh al-Soghra in the countryside, killing many of them, including Hussein al-Khalid. 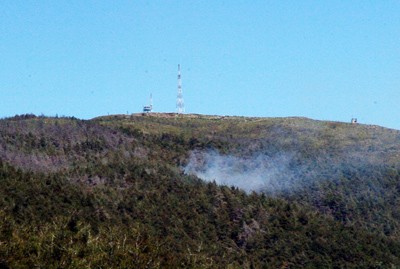 The armed terrorist groups’ aggression on the mostly Armenian-populated city of Kassab on Syria’s northern border with Turkey has elicited strong local, regional and international condemnations and rage especially that the aggression has been covered and backed by the Turkish government of Erdogan.

Venezuelan Committee for Solidarity with the Struggle of the Arab Peoples and Peoples of the Middle East against Imperialism condemned the aggression, launched by multinational mercenary terrorists backed by the Turkish army against Kassab city in Lattakia.

The Committee said in a statement that these assaults aim at opening a new front against the Syrian people and their leadership, condemning targeting Kassab city and its residents, who are of Armenian origin, in a new phase of the genocide against Armenians launched by Recep Tayyip Erdogan’s government.

“The Committee strongly condemns the criminal policy of Erdogan, the small agent of imperialism and Zionism in the region, as it supports the Turkish people’s struggle for toppling him and suing him for the crimes committed against the Turkish and Syrian peoples,” the statement added.

The Venezuelan Committee saluted “the brave Syrian Arab Army soldiers, who offer their souls for combating the new terrorist aggression against Syria.”

The opposition Change and Liberation Front in Syria labeled the March 20 Turkish aggression on Kassab as “a blatant direct interference” in the line of the crisis in Syria.

The Front warned in a statement issued from a meeting of the Front’s representing parties that Erdogan’s government is playing “a dangerous game from which Turkey will not be unharmed”.

The statement considered the Turkish intervention, which was made more evident recently in the assault on Kassab where Turkish tanks directly and openly backed the mercenary terrorists, as “another face of the Zionist aggression on Syria” and a completion of a plot to undermine and debilitate the Syrian state and army. 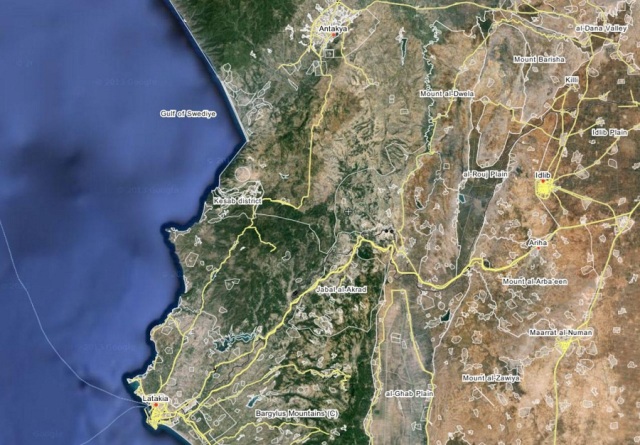 Most Syrian military bases, coastal defense batteries, Coast Guard, Anti-Aircraft batteries and air bases are along the flat coast. Second only to Damascus, this area is home to one of the world’s most dense anti-aircraft and anti-ship networks that contain not only Yakhont KH61 and Sunburn anti-ship cruise missiles but also the vaunted S-300 anti-aircraft and Pantsir systems. From the border with Lebanon at the checkpoint in Al-’Azeeziyya to the border of Turkish-Occupied Syria at Kasab, every military asset is protected by hundreds of soldiers who brandish the finest equipment produced by the Russian Federation not to mention, also, Russian advisers whose tasks are to make sure all systems are both protected and operated according to the agreements between the two countries. 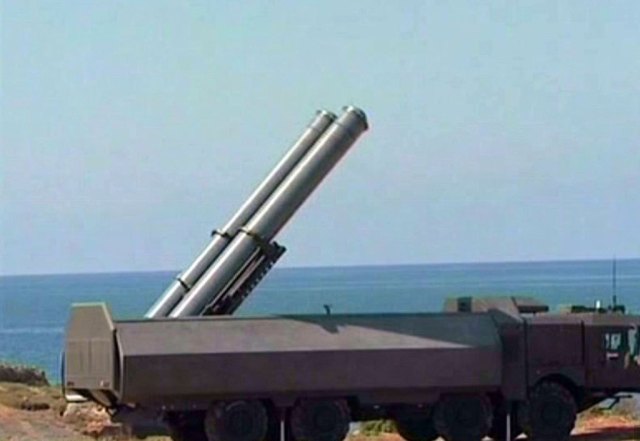 Besides the technical wonders of the anti-ship missiles and the still poorly understood S-300s are some of Syria’s best armor and infantry. Because the Syrian Army permits inductees to remain in their provinces of origin after they have completed their basic training (even allowing them to sleep at home), these soldiers tend to be extremely knowledgeable about the topography and locales found on any satellite map. They are also made up disproportionately of Alawis, Christians and Sunnis (who have been raised among minority groups). The terrorist rats are going up against a most formidable enemy here. 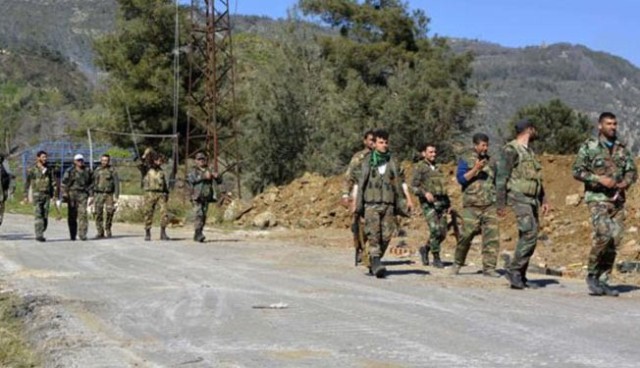 In order for the rodents to effectuate a “breakthrough”, they will have to do that over 2 types of terrain: the first is very mountainous with few passable roads (it’s no secret this campaign was started in the spring); and the second is narrow and flat coastal plain with negligible roadways and little places to hide. In either case the movement of rats will only generate higher casualties since the Syrian Air Force will have unimpeded air supremacy over the coast while the SAA will have the benefit of powerful artillery and infantry to blunt any attack in the mountains.

Armenians are volunteering for service with the NDF now by the thousands. Many have already undergone training as conscripts in the SAA or the reserves. The level of rage is high with memories of their own Holocaust refreshed by Erdoghan’s unbelievable stupidity.